Cary B. Bryson, Co-Founder of Bryson Law Firm LLC, was selected to be featured in The Wall Street Journal to showcase his coveted status as a Masters of Success

Lafayette, LA – August 20, 2019 –Cary Bryson, a Louisiana native, co-founded the Bryson Law Firm LLC with his wife, Angie. With over 28 years of diverse legal experience, Bryson is always looking out for his client’s best interests. Recently, he was named a “Master of Success” in The Wall Street Journal by the National Association of Experts, Writers and Speakers® due to his vast contributions to his field. The spread, also titled “Masters of Success” shines the spotlight on an elite group of entrepreneurs and their credentials. The piece, a full-page feature, ran in the July 30th issue of The Wall Street Journal.

The The Wall Street Journal feature highlights Bryson’s forward thinking and as a business leader who has mastered success. The publication summarized his success with the following:

“Cary B. Bryson is co-founder of Bryson Law Firm, LLC, a Louisiana-based tax resolution and controversy law firm. He’s helped thousands climb out of tax trouble. A well-known tax law specialist with 28 years of experience, he’s an aggressive and capable advocate for his clients. Cary authored the best-seller, Protect and Defend, and has been featured in Newsweek and USA Today, and on NBC, ABC, CBS and FOX.”

The Wall Street Journal is a publication that curates U.S. and world news. The winner of 36 Pulitzer prizes, the esteemed newspaper has been a trusted name in the journalism industry since 1889. Their thorough analysis and in-depth reporting has attracted readers across the world and helped maintain their reputation as a go-to source for international information. Bryson’s appearance on this distinguished platform allows him to spread his business knowledge and further solidify his reputation as a leader. 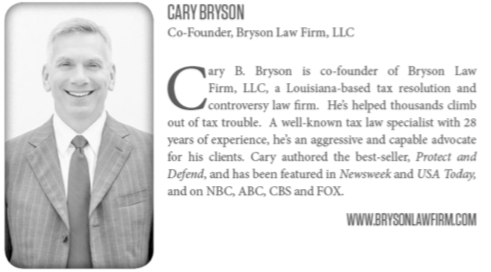 The National Association of Experts, Writers & Speakers® (NAEWS) was founded to honor entrepreneurs and professionals around the world for their contribution to education, enlightenment and the advancement of business. This organization was created to help people come together and uncover the secrets of the world’s top experts, writers and speakers in order to attain a higher level of success. By providing information, strategies and networking opportunities, the National Association of Experts, Writers & Speakers® enables creative and knowledgeable people to build on their talents to achieve even more personal and professional success.

Cary B. Bryson is co-founder of Bryson Law Firm, L.L.C. He is a native of Baker, Louisiana. Cary received a Bachelor of General Studies from L.S.U. Baton Rouge in 1988. He then received his law degree in 1991 from Paul M. Hebert Law Center in Baton Rouge, Louisiana. Cary’s 28 years of diverse legal experience enable him to be a strong advocate for his clients. He is admitted to U.S. Tax Court. He has been featured in several local and national media outlets for his work in the tax field, including the Wall Street Journal, NBC, ABC, CBS, and FOX. He has given seminars to fellow attorneys, CPAs and other tax professionals to teach them about tax work and options. His book, “Protect and Defend”, is an Amazon best-seller. He holds an AV Martindale-Hubbell Peer Review rating and was named by the Acadiana Profile magazine as one of the area’s top attorneys in the tax field. He loves to fish, hunt and hang out with Angie and their six children!